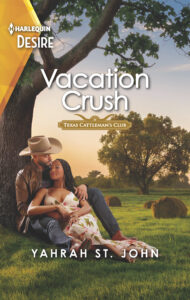 After confessing her unrequited feelings for rancher Jonathan Lattimore in an accidental livestream, Natalie Hastings makes a hasty retreat from the gossips of Royal, Texas. But when the object of her affection checks in to her resort, there’s nowhere to hide. Turns out, Jonathan is ready to reciprocate her feelings…at least for the week. With the fire still burning even after they return home, can Natalie make Jonathan see her as more than a vacation fling?

Natalie couldn’t believe she’d been foolish enough to think she could sit beside Jonathan Lattimore and have a drink like they were two normal strangers meeting on a holiday. This wasn’t Roman Holiday. I’m such an idiot. He probably thinks my comment about everyone needing someone was some sort of come-on attempt. That I want to be the somebody he needs.

As much as she might wish that were true, it wasn’t. She had to face the facts. Jonathan Lattimore would never be interested in her other than as a passing acquaintance. The sooner she got over the romantic notions that they would make a great couple, the better.

Once she reached the hotel lobby, she glanced around for the elevators and furiously pressed the up button. She heard Jonathan calling out after her, but she didn’t stop walking. She wasn’t interested in anything he had to say. She wanted to get to her room, have a hot shower and figure out how she would stay out of his path for the rest of the week. Because why should she leave? She paid for this trip and had as much a right to be here as him. She wasn’t about to let him run her off.

“Natalie!” Jonathan called her name and within seconds, he’d caught up to her.

She glared at him before entering the cab. Natalie thought her withering look would be enough to deter him, but he joined her anyway. The silence inside the short climb to the third floor was deafening. She certainly wasn’t about to apologize for attempting to care about him, but he wasn’t easy to ignore, either. With his commanding stature and presence, he seemed to take up all the oxygen in the cab.

When the elevator dinged on her floor, Natalie quickly exited and rushed down the hall, but Jonathan’s sure steps followed. Reaching her door, she swiped the key card and was about to open it when she found Jonathan behind her. She turned and faced him. “What do you want?”

“If you’ll give me the chance, I’d like to apologize,” Jonathan replied.

Natalie was shocked. She hadn’t expected that response and felt like someone had let the wind out of her sails. So much for righteous indignation.

“Can I come in?” Jonathan asked, peering at her intently.

Natalie didn’t know why, but she held open the door. As Jonathan walked past her, she caught a tantalizing whiff of his sexy scent that was male and earthy with a hint of spice. Everything about him assailed her senses, and it made her think of all sorts of naughty things she’d like to do with him. She shook her head to erase the image and shut the door.

Walking inside, she was impressed with the corner suite the concierge had given her. A big bed stood center stage and there was a small, nicely appointed seating area with a desk. The curtains were open, and she could see a balcony. But nothing was more impressive than the six-foot plus man standing in the middle of the room dominating the space.

Although he was broad-shouldered and slim-hipped, there was an inherent strength in his gait and Natalie found herself unable to look away. Jonathan fit the mold for tall, dark and handsome.

“I’m sorry, Natalie,” Jonathan began. “I guess I don’t know to act around a lady anymore. I’m sorry if I appeared standoffish because that wasn’t my intent. I got caught up in some past memories.”

Natalie shrugged as she slipped her purse off her shoulder and placed it on the cocktail table. “It happens sometimes.”

He cocked his head to one side as if he didn’t believe her. “Are you being real with me? Or telling me what I want to hear, so I’ll get out of your room?”

“I’m being straight up. I accept your apology.” She took a seat on the sofa.

“Good. Because I enjoyed talking to you downstairs and I don’t want that to be our last conversation.”

“You don’t?” She didn’t understand what was happening. Jonathan always treated her as if she were a friend and nothing more. Did he see this vacation as a way to deepen their relationship? She’d always wanted that, but she didn’t want to be used, either. He knew how she felt about him. It would be easy for him to lay on the charm. She had to be on her guard.

He shook his head. “No, I want to get to know you better. Can we start over?”

“I suppose,” Natalie said uneasily. Her mouth was dry, and her knees were weak, so she kicked off her sandals. She didn’t know what to do next; there was a palpable energy pulsating back and forth between them. “Umm…would you like a drink?”

“I’d like that very much.” Jonathan eyes met her gaze with a directness that stole her breath.

Natalie blinked, snapping her out of the spiderlike web she felt he had her in. “I have no idea what’s in the fridge.”

“Why don’t we find out?” His voice was like dark chocolate and red wine, rich and full-bodied, full of flavor. She watched him walk over and bend his tall frame to peer into the mini fridge. From her viewpoint, Natalie saw some water, Coke, mini spirits, and small orange and cranberry juices, but she would much rather focus on his bum in his jeans.

Jonathan pulled out several beverages and made a screwdriver for her and a rum and Coke for him. Afterward, he came down and sat beside her on the sofa. She was surprised when he asked, “Have you heard anything about Aubrey Collins?” She doubted he was here for conversation. Or was that the excuse he was going to use for his being in her room?

Nonetheless, she answered his question. “Last I heard, she’s suffered some memory loss,” Natalie replied, “though the doctors are hopeful it’s temporary.”

Aubrey was a mutual friend who’d been injured at the Texas Cattleman’s Club party a month ago when the podium she was standing on collapsed. When she fell, she’d hit her head and was knocked unconscious.

“I’m sorry to hear that,” Jonathan said, sipping his drink. “I hope she recovers.”

“So do I,” Natalie responded. She also prayed they moved on from this topic of conversation, but her prayers weren’t answered.

“Are we ever going to talk about the elephant in the room?” Jonathan inquired, turning to his side. His eyes narrowed and he raked her face with his gaze.

“Why?” Natalie’s pulse leaped and she found herself ensnared by the look he was giving her. “I want to forget that day ever happened. Plus we agreed to start over. Why dwell in the past?”

“Because it’s necessary to move forward,” Jonathan responded. “Listen.” One of his large hands grasped one of her thighs and Natalie sucked in a deep breath at the unexpected contact. A jolt hit her like an electrical charge reverberating lower, and her core tightened in response. “I was flattered when I heard how you felt about me even though your feelings might be misguided.”

She frowned. “You were flattered? Then why did you avoid me?”

Jonathan shrugged. “Because I didn’t know what to say. I’m really not all that great.”

Natalie burst out laughing and suddenly the ice was broken between them. All this time, she’d been so worried to face him, but she could forget her humiliation when he was self-deprecating. “Thanks for that,” she said. “I think I’ve been taking this way too seriously and I guess we could both learn to lighten up.”

Natalie looked up and found Jonathan’s caramel-colored eyes, rimmed with thick, curling lashes, looking at her intently in a way she’d never seen before. They stared at each other for several long, compelling seconds. It set her pulse racing and Natalie had to remind herself that Jonathan wasn’t interested in her. In the past, she might have thrown herself at him, but this time he would have to make the first move. And…there was something dangerous in his stare.

Jonathan should have never come to her room. After being shocked to see Natalie at the pool bar, he should have walked in the other direction, but there was something about her. About the way she looked at him so sweetly that made a flare of desire run through him. His gaze swept her face, and he knew she registered his interest.

Did it surprise her? It shouldn’t. Her body was perfect in every way to him. It’s why he hadn’t removed his hand from her thigh. He’d given in to the impulse to touch her and if given the slightest indication she wanted more, he would touch her all over from her generous breasts all the way down to her petite feet.

Her eyes were fastened on his and Jonathan felt the throb of sexual energy pulsating between them, dimming out anything but the two of them. He reached out his hand and slowly trailed a path down the curve of her cheek. She was as entranced as he was, so when he curved his hand around the nape of her neck and brought her toward him, she came willingly. Seconds later, his mouth closed over hers and an urgency he’d never felt before rushed to the surface. When he coaxed her lips apart, to deepen the kiss, she obliged. So Jonathan held Natalie in place and plundered her mouth, but even that wasn’t enough.

He pulled her closer and only then did he give in to temptation to shape her breasts. He splayed his hands over them, and they ripened at his touch. When her nipple crested against his palm, Jonathan wanted to feast on it, but this was Natalie. She had feelings for him. He didn’t want to hurt her or have her confused by what this was. Lust pure and simple.

Reluctantly, he pulled away and tried to regain his composure. “That was a revelation.” His voice sounded low and husky even to him. Because if he was honest, he wanted to stay the night with Natalie and lose himself in all her delicious curves, but it wouldn’t be fair.