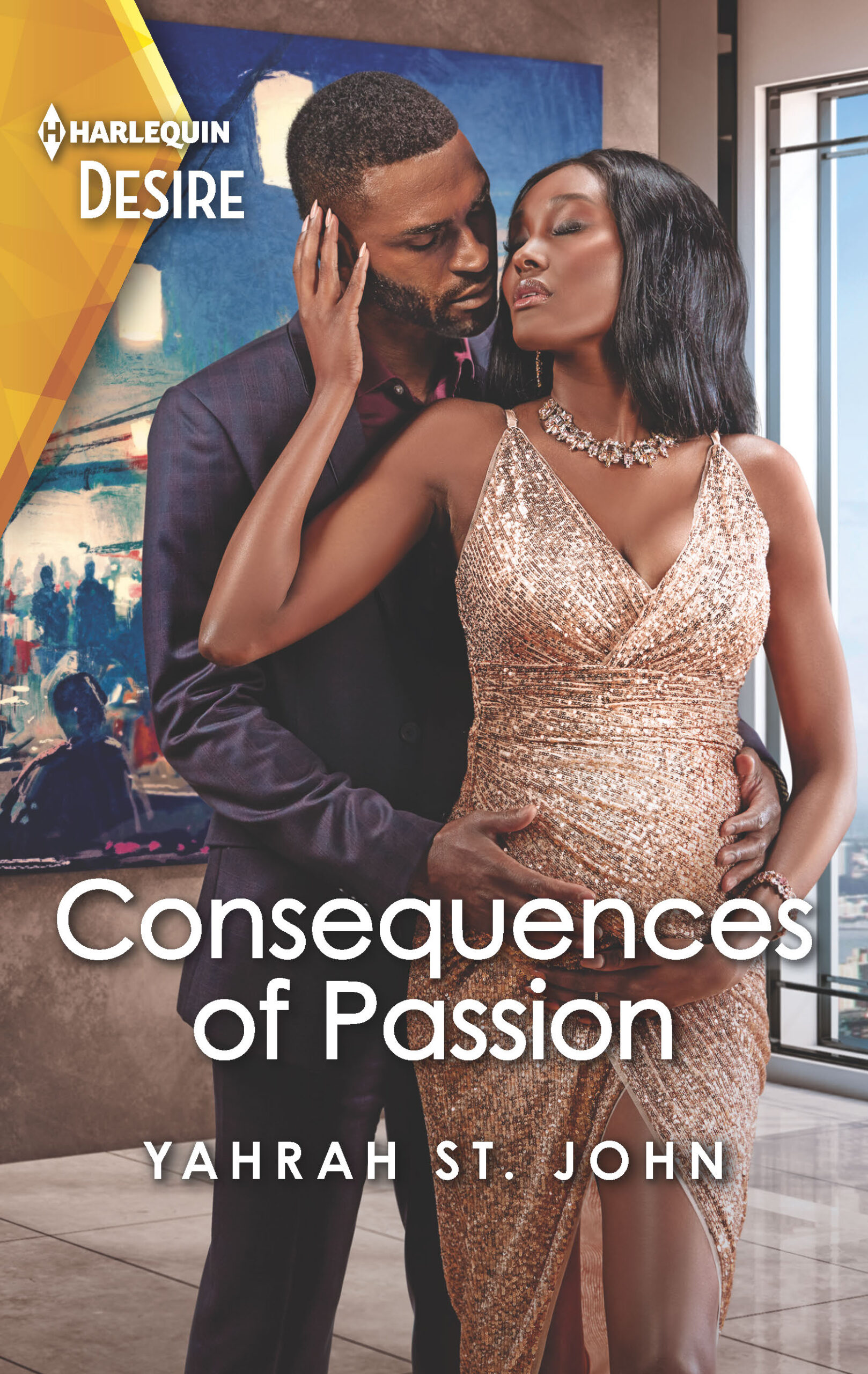 When a winning bachelor bid

Psychologist Shantel Wilson surprises herself by attending a bachelor auction as a favour to her friend—and bidding on his older brother! But the outcome of her steamy night with Roman Lockett, scion to an Atlanta football dynasty? She’s expecting. Now Roman wants to claim her—and his heir—yet Shantel needs more than a marriage of convenience from this man who put passion in her playbook…

Suddenly the night he hadn’t been looking forward to had taken an unexpected turn. His mood became con­siderably lighter as he extricated himself from several hungry females with dollar signs in their eyes to find the demure woman in the pink dress. But when he fi­nally did, recognition dawned.

“Do we know each other?” he inquired, searching her arresting face. She wasn’t classically beautiful like many of the models and actresses he typically dated, but there was a freshness to her symmetrical features, proud nose and pink kissable lips.

Her eyebrows rose and he could feel her bristle. “Is that what you say to all the ladies, Roman?”

She rolled her eyes and Roman watched, transfixed, as she moved to step away from him. “Wait.” His hand jerked out to clasp around her upper arm, and a jolt of awareness rushed through him. Does she feel it too? It didn’t appear so because she glanced down at where he still held her, and he released her arm. “I’m sorry, but are you going to introduce yourself?”

“Shantel?” He leisurely swept his gaze over her and was rewarded when a blush stole up her cheeks. “You look stunning.” He hadn’t recognized her. Her hair hung in soft curls down her back, her makeup was artfully applied and she had on killer heels making her nearly reach his chin.

“You’re welcome.” His mouth creased at the corners into a full-blown smile. “What are you doing here?”

“That brother of yours convinced me to come and bid on him and then he’s a no-show. Can you believe that?”

Roman chuckled. “I can.” Julian was known to be unreliable at the best of times.

“Anyway, I was about to leave.”

“I mean, if you’re already here, you might as well stay.” Roman didn’t want her to leave. Shantel Wilson was the most interesting part of his evening.

“Because I’d like you to,” he responded. “And be­cause I need you.”

A frown marred her face. “How’s that?”

He leaned forward and whispered in her ear. “I need you to protect me from the women in this room.” He turned her shoulder toward the ballroom. “Look at them. They’re vultures and I’m fresh meat.”

Shantel laughed and the sound was like an intoxicat­ing elixir to his system. “So you’ll stay?” he inquired. “You can bid on me like you were going to bid on Ju­lian. I’ll cover whatever amount it takes to ensure you’re the winning bid.”

“Are you sure about that?” she asked. “Some of these ladies look like they’re willing to bet the farm.”

“That may be so, but I’m more interested in the woman in front of me.” Ever since he’d seen her walk in, he’d been unable to turn away, and it was odd given they’d met before. Usually he never gave a woman a second look, but Shantel was different.

“Well, in that case, I guess I’ll stick around,” Shantel said with a smirk. “I mean, I have nothing else to do.”

“I’m sorry,” Shantel said. “I don’t really know how to do this.” She motioned back and forth between them.

“You know.” She blushed again and Roman was even more intrigued. What woman blushed at her age? Not many women surprised him, but she did. First her trans­formation and now a shyness he’d never noticed. Was that because she’d never fathomed a second glance?

“The whole cat and mouse thing men and women do when they’re dating or trying to feel each other out,” Shantel responded. “I did my thesis on it back in col­lege.”

“Your thesis? What did you study?”

“Psychology,” she offered. “It’s important to under­stand people’s reasoning behind how they behave.”

“And did your studies provide clarity?” Roman in­quired.

“Sure they did. They taught me that I don’t under­stand a damn thing,” Shantel responded with a laugh, and Roman couldn’t help joining her. She had a natu­ralness to her missing in other women he encountered.

He wanted to learn more, but suddenly Giana was onstage announcing it was time for the Bachelor Auc­tion to start and all participants were needed backstage. Roman hated to leave. “Will you stay?” he asked. “And bid on me, however much it takes.”

He liked it when she said his name and if he had his way, she’d be saying it a lot more before the night was over. “Say yes.” Her eyes grew wide at the command­ing tone in his voice, so he amended, “Please.”

“Fine. You’d better be worth every penny.”

Roman grinned widely. “Oh, I am.” He left her blush­ing from ear to ear. It appeared the night was looking up and wouldn’t be a complete bust, after all.

He made his way backstage and found Giana in a huff. He smiled into her dark brown eyes surrounded by clear chocolate skin similar to his. They’d both taken after their father’s dark coloring. “There you are. We were looking everywhere for you.”

“Sorry, I was otherwise engaged.”

Giana smothered a laugh. “Oh, I bet you were. I’ve already had a half dozen women ask how much I think it’ll take to win you for the night.”

“Oh Lord.” Roman rolled his eyes. He no more wanted to spend an evening in those women’s com­pany than he would want a root canal. It was why he was happy to have an ace in the hole. Shantel would be the winning bid and when the night was over, he had every intention of taking the delectable beauty in his arms. All night long.

Roman glanced behind the curtain and saw Shantel standing toward the back of the room. His skin tight­ened and his muscles surged at the sight of her. He wanted to ravish her all night long, but he could only offer her tonight because he didn’t do commitment. Roman wondered what Julian would think about him getting intimate with his best friend. Would he consider it a betrayal of their brotherhood?

Just how far was he willing to go for one night with Shantel?