Blind Date with the Spare Heir 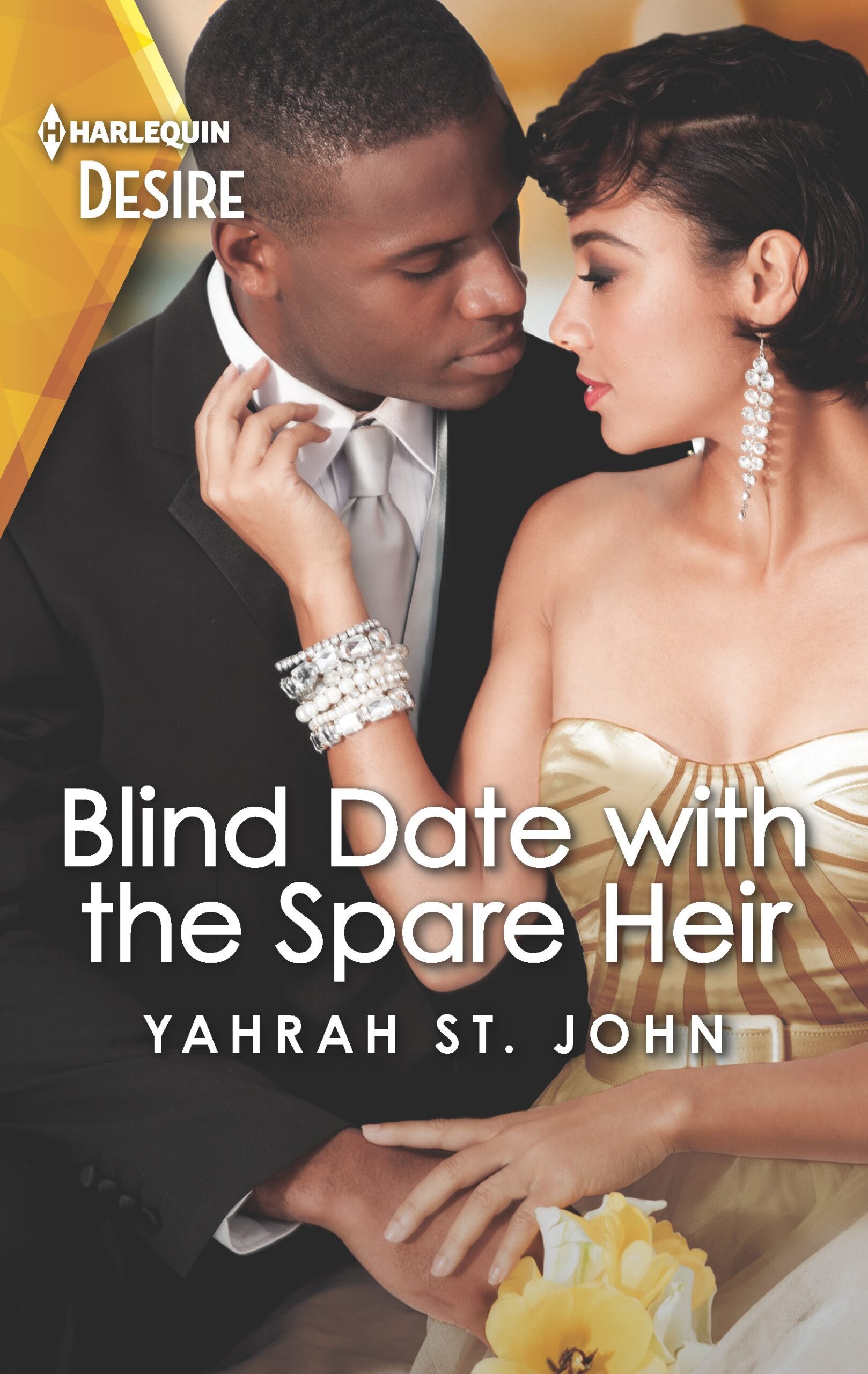 She wants the truth.

PR agent Elyse Harper finally has a way into Atlanta’s powerful Lockett family. Julian Lockett, the second son, is being pressured to settle down—with his mother playing matchmaker! Dating Julian is Elyse’s chance to prove the Locketts swindled her father out of his share of their football dynasty. The easy part of her plan? Playing lovers with the playboy. There’s no need to pretend because Julian’s the sexiest man Elyse has ever met. The hard part? Keeping her mind on her goal once she’s in Julian’s bed…

Julian’s brain registered that the woman had to be Tiffany Mayes, but his lungs were being starved of oxygen. He had to blink a few times to remind himself to pick his jaw up from the floor, take a breath, and stop staring. She wasn’t just beautiful, she was striking, with almond-shaped brown eyes, incredibly thick lashes and lush, pouting lips.

Her hair was short and chic with wispy bangs coming forward to reveal a round face. She had a slender figure, curves in the right places, and her strapless gold dress and gold strappy sandals did her justice. She looked like a Greek goddess.

“No?” He raised an insouciant brow.

She shook her head. “I gave her a different time to meet you and commandeered her place instead.”

She came toward Julian and he caught a whiff of her floral scent, which made him eager to lean forward when she offered her hand. “The name’s Elyse Harper.” Her hand was small, but Julian noticed it was elegant and perfectly manicured.

“Pleasure.” She gave him a soft, enchanting smile and a hot tsunami of lust swept through him at the sight. He wanted more.

“May I sit down?” Her eyes went to the empty seat beside his.

“Of course. I admit, I’m at a loss as to why anyone would go through so much trouble to meet me.” Julian was glad for the interruption. The dates his mother set him up with had been miserable and he was in no mood for a repeat, but this beautiful interloper intrigued him.

Elyse stated. “Any woman would be eager to make your acquaintance.”

“And you’re among the eager masses?” His forehead creased with his doubt that that was true. A woman this beautiful had to have men lined up at her door. And if he was lucky, he would be one of them.

Elyse cocked her head to one side and offered a self- mocking smile. “Yes, I suppose I am.”

“Well, then, you should know the first thing about me.” Julian downed the remaining swallow of his bourbon. “This place isn’t my speed. So how about we get out of here and go someplace else?”

“Sounds great.” She rose and Julian was right there helping to move her chair aside. He offered her his arm and she accepted. After paying for his drink, they left the restaurant.

Once outside, Julian handed the valet his ticket, but Elyse tried to slip out of his grasp. “I should get my car and follow you.”

He shook his head. “Since you wanted to meet me so badly, then you must know I may have a reputation, but I’m no serial killer. My family is a staple in this com- munity and I wouldn’t do anything to damage our name. I’ll bring you back here when the evening is over.”

Her eyes grew round and amusement flashed across them. “All right.”

The valet eased Julian’s Bugatti Veyron to the curb and, before she could change her mind, Julian was helping her into the passenger seat. As he rounded the back of the car to the driver’s side, he contemplated the evening ahead, excited to find out exactly why Elyse Harper had wanted to meet him. Something told him he was in for a wild ride.

Elyse had seen pictures of Julian Lockett before. She’d watched videos of him on social media. But she had not been prepared for the effect of meeting him in person. Although he wasn’t quite six feet, he more than towered over her five-foot-four height. The restaurant had seemed far too small to hold a man like him.

Julian was sex personified dressed in a jet-black suit covering his lean muscled frame. The black shirt beneath the superbly tailored jacket had been teamed with a sleek black tie. Add his smooth, toffee-colored skin, short, neatly cropped curly fade, bushy eyebrows, deep-set light brown eyes rimmed with dark brown lashes, and a sexy five-o’clock shadow on a square jaw… Julian Lockett was one helluva of a lethal com- bination. Clearly at ease with his place in the world, he exuded wealth, charm and style.

All Elyse could do when she looked at his honed perfection was stare. Though she wasn’t around the oppo- site sex much other than work, she could tell attraction lurked in those sexy eyes of his. He was interested in her. That was good. She could use it to her advantage and get close, but she had to play her cards right.

She’d done her homework. He was spoiled and used to getting his way. How could he not be when he was handsome and charming? He liked the thrill of the chase and, once he obtained what he’d wanted, he quickly grew bored. Elyse mustn’t let that happen. To keep his interest, she would have to be coy and elusive. She’d already given him the upper hand by revealing she’d sought him out, but she’d had to. She saw no way around not telling him that she’d given his date the boot. But she also wasn’t about to fall into his bed, either.

Was she prepared to go that far?

Her plan was to get close to Julian and find out any family secrets she could. That, combined with her ammunition about how Josiah swindled her father would ruin Josiah’s reputation and take him down a peg. It might not get her father’s shares back, but it would certainly hit Josiah where it hurt: in his pocketbook. And Elyse had been using her mother’s maiden name for years to conceal her identity so she doubted the Locketts would put two and two together. For now, she was happy where she sat in the passenger seat of his Bugatti Veyron. Elyse had always wondered what it would be like to have money at your fingertips. Now she knew.

“So where are you taking me?” she asked. Julian said he wasn’t into the pomp and circumstance of Bacchanalia, so she was curious as to what did move him.

He hazarded a glance at her. “You’ll see.” And he returned his eyes to the road.

“Aren’t you going to ask me how I found about your date tonight?”

He shrugged. “In due time. Besides I’m just happy you saved me from another dull date with one of my mother’s minions.”

“Ouch, sounds like you don’t have a high opinion of these women your mother is introducing you to.”

He gave her a side glance. “In her mind, they’re all women my age or younger with the right pedigree. Yet she fails to understand that none of them is my type.”

“And who is your type?” Elyse asked, folding her arms across her chest and turning to study his profile.

The man was so good-looking in person that she had to remind herself to breathe.

He didn’t look at her when he said the one word. In- stead, he merely gave Elyse a wolfish smile, telling her he might upend her well-thought-out plan to get even with his father. She was in public relations and knew exactly the kind of damage a scandal like Josiah swindling her father could do to his reputation because he prided himself on being a good business and family man. Elyse would need more ammo and hoped getting closer to Julian might help her obtain info she could exploit. What she hadn’t counted on was how charming Julian was or that he’d make her heart go pitter pat.