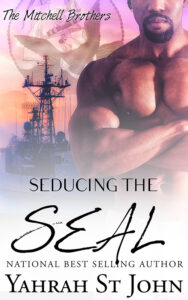 Once satisfied with meaningless flings, the combat death of Navy SEAL Cage Mitchell’s best friend prompts him to retire from the military and look for deeper meaning in life. That includes pondering whether he’s ready for a wife and children.

What Cage doesn’t bargain for is falling for his younger brother Cameron’s girlfriend, Monae Williams. Monae, a sincere young woman, is passionate about working with foster children because she grew up in the rough-and-tumble foster system. She’s ready to settle down, but her boyfriend is more interested in seeking an Air Force promotion.

Honor and duty, the core of Cage’s character, prevent him from pursuing Monae; but when her relationship with Cameron ends, Cage tosses duty to his family aside. Usually guarded, Monae has fallen just as hard for Cage.

All sorts of fallouts ensue . . . but Monae has already seduced the SEAL, and there may be no turning back.

How’s it going with you and Cameron?”

Monae stopped and turned to him. “Is that really what you want to know? About me and your brother?”

“Really, Cage?” Monae put her hands on her hips. “How long are we going to keep going like this?”

“That’s because nothing is. I won’t allow it. You’re my brother’s woman.”

“So, you admit there is something?” Monae pressed. When Cage remained silent, she stepped toward him until she was in his personal space, inches away. “Cage—”

“Listen, Monae, you need to back up,” Cage warned. He wasn’t sure he could resist her if she came any closer, but she did. He looked at her mouth. Oh Lord, her mouth. It looked warm and lush. She looked up at him with her almond eyes, and he couldn’t deny it any longer. He took her face between his hands, swiftly tilted her head up, and kissed her.

Jesus. She tastes so damn good. He slid one hand into her hair and put the other around her waist so he could pull her closer and kiss her harder. Monae must have liked it because she made a sound in the back of her throat, and he felt her passion give way as she opened her lips to his questing tongue. He went past their satin heat to go further, past her teeth until their tongues could mate.

That’s when Cage lost it. Lost himself in the taste of her. In her smell—fresh, clean, and utterly Monae. In the feel of her small but perfectly round breasts pressed against the hammering in his chest.

He wanted more. No, he needed more. Angling his head, he tightened his grip on her. He wished she would wrap her legs around him and he could press her into the sand and take her right there on the beach.

That’s when it hit him, what he was doing. He was making out with his brother’s girl on the beach where anyone in his family could find him. He had to stop this. He pushed away from her so hard that Monae stumbled backward. She looked as dazed as he felt.

“That shouldn’t have happened,” he said hoarsely.

“That was inevitable,” Monae replied. “We’ve been trying to deny what’s happening, but I don’t know how to do that anymore.”