My newest release Red Carpet Redemption is here just in time to fill your Christmas stockings.

I know you’ll gobble up Red Carpet Redemption, the third book in The Stewart Heirs Series. My inspiration for the book came from watching the Jennifer Lopez movie The Backup Plan. What if the heroine used a sperm donor to get pregnant and falls in love with him years later? What if the sperm donor is Dane Stewart, a Hollywood A-list actor and America’s Sexiest Man Alive?

Dane is the devilish rake that every woman adores and would love to go to bed with, but he’s got bigger fish to fry. Dane is embroiled in a media scandal when it’s revealed he fathered a baby. Yes, a baby! Early on in his career, Dane made a one-time sperm donation to make a fast buck. Dane is shocked to learn he has a seven-year-old son, JAYDEN TURNER, but he wants to get to know him. As for his son’s mother, IRIS TURNER – Dane finds the single-mom attractive and the feeling is mutual. The chemistry between them is red-hot and soon Dane is giving her the full-court press seduction. Does America’s favorite heartthrob want Iris just for their son? Or do they have something more worth building on?

If you loved the series, you’re in for a real treat because I have extended the series with Secrets of a Fake Fiancée. The last and final book in The Stewart Heirs Series will be available May 2020.

Spunky personal assistant MORGAN STEWART is eager to claim the family denied her. She’s been living incognito as her brother DANE STEWART’s assistant while learning all she could about the Stewarts. Morgan reveals her true identity as HENRY STEWART’s illegitimate daughter at Dane’s wedding reception and is rejected. Sexy playboy JARED ROBINSON witnesses the interaction and although he has his own family drama with his MIA brother, he’s intrigued by the fiery Morgan and offers her a deal she can’t refuse. Don’t miss reading their dramatic and sexy love story.

If you missed Books 1 & 2 in The Stewart Heir’s Series, they are still available for purchase. 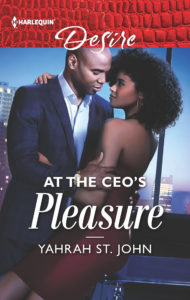 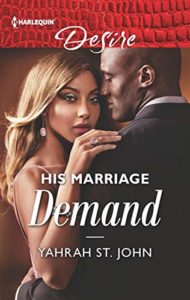 In my last newsletter, I mentioned being part of a continuity with other Harlequin Desire authors titled The Seven Sins. Insatiable Hunger is book 3 in the series and will be released in July 2020. Here’s a snippet of the concept:

For many years, prominent families entrusted the Black Crescent Hedge Fund to turn millions into billions. Black Crescent was an elite, boutique business that took on only a small number of clients. It was wildly successful… until the money vanished along with the founder. Ten families lost their wealth in one fell swoop, forever altering the lives of everyone involved especially the teens. Each of them coped through pride, or avoidance, or lust—but the crutches have become sins….

Financial analyst Ryan Hathaway grew up with corporate attorney Jessie Acosta as his next-door neighbor. They’ve been best friends for as long as Ryan can remember, but she sees him as a nice guy and one of the lucky ones because his family didn’t entrust their life’s savings to Black Crescent because the Acosta’s lost everything. Ryan never admitted he’s carried a torch for Jessie all these years because Jessie was interested in Hugh O’ Malley whose family helped pay for Jessie’s education after her family lost its fortune. That changes at the ten-year high school reunion when Jessie suddenly sees Ryan with new eyes. Their relationship shifts from friends to lovers with an insatiable hunger they can no longer deny. But when the past creeps in threatening their newfound love, will they run from the drama or fight for love?

Stay tuned on my latest happenings by visiting my website or following me on Facebook because it’s one the social media platform I actually manage to stay on top of. ?