I hope everyone has stayed healthy and safe during these unprecedented times. Like many of you, the pandemic has changed our way of life and my husband and I have had to find ways to adapt. I worked from home for a few months while he went to work as an essential worker. However, I’m back in the office now. I may be in the minority, but I didn’t like working from home. I’m a social butterfly and much prefer to talk to my team in-person versus Zoom calls. Plus, I didn’t like using my home office for work, that’s my creative space for Yahrah St. John.

In meantime, I’ve kept busy cooking, reading, crafting new stories and finding ways to amuse me and the hubby. As the entertainment director in our relationship, I scheduled a Zoom call for a paint-and-sip at home. It was a lot of fun. Since I’m always up for a challenge and was nicknamed “adventure girl” by my husband, I have gone to the great outdoors. It’s amazing what you can find to do locally when you put your mind to it.  There’s horseback riding, canoeing, corn mazes, blueberry and sunflower picking farms, wild life safaris, hot air ballooning and ziplining (which I normally do while vacationing). Stay tuned for pics of all the latest adventures I talk my husband into.

Today, November 1st marks the release of my 35th book: Claimed by the Hero, Book 1 in the Mitchell Brothers’ trilogy. Be sure to visit my website to find out details about the Claimed by the Hero contest and how you can enter the drawing for a $50 restaurant gift card. Here’s a snippet about the book!

Maryland gubernatorial candidate Caden Mitchell has achieved every goal he’s ever set: West Point graduate, decorated Army war hero, mayor of Baltimore. That is, every goal but one: becoming a husband and father. That goal was dashed after his greatest love, Savannah Grace Vasquez, disappeared from his life without a trace more than a decade before. But during a fundraiser for his latest political bid, Caden spots a woman who looks just like Savannah. Can it be her? It is! Savannah has never stopped loving Caden, so she pulls another disappearing act after the fundraiser. She has a secret that could topple his political run, and she wants to keep it under wraps: She is the mother of his son. But when Caden finds out he’s a father, he wants to make Savannah a permanent part of his life. What happens to these earnest lovers after Savannah is claimed by the hero? 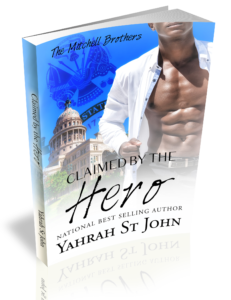 The Mitchell Brothers series will feature Caden, Cage and Cameron Mitchel, three brothers who served in different branches of the military: Army, Navy and the Air Force. I loosely modeled the series after my husband and his brothers who also served our country in the Army, Navy and Marines. I’m currently working on Cage’s story Seducing the Seal expect his book in early 2021.

It will be quiet on the Harlequin Desire home front until spring 2021, but I will return with: The Lockets of Tuxedo Park. The Lockett’s own a football franchise in Atlanta and the four-book series will feature siblings: Roman, Julian, Giana and Xavier Lockett. Roman’s book, Consequences of Passion is scheduled for release in April 2021. Be on the lookout for a sneak peak of the cover – coming soon.