As the coronavirus continues to surge, I hope you are staying safe and following all precautions to keep your family and friends healthy. My husband and I have primarily been home-bound though occasionally we have gone out to a restaurant to escape the monotony of cooking every day and doing dishes. J

When I’m not cooking or at my day job which unfortunately I had to return to, I’m in my YSJ office or “she-study” as I’ve coined it, crafting new stories to keep you entertained during these challenging times. I can’t thank you, my readers enough for helping give my books a sales boost throughout this crisis. You’re the best! I can only hope I’ve done a little to take your mind off your worries and escape with one of my romances.

As I mentioned in my last newsletter, Harlequin remains committed to authors and printing our books. They even changed manufacturers when the prior one shutdown during COVID. That being said, print books and bookstores in certain markets are slow to open or get stock. Feel free to support them, but if not you can purchase a print version online.

I’m excited to announce today is the release of my 34th book: Insatiable Hunger, Book 3 in Dynasties: Seven Sins series. The book is a part of continuity with other great Harlequin Desire authors, but the book can be read as a stand-alone.

The series will take place in Falling Brook, NJ with each of the books representing one of the Seven Sins: Pride, Lust, Gluttony (Hunger), Greed (Ambition), Envy, Wrath, Sloth…For many years, prominent families entrusted the Black Crescent Hedge Fund to turn millions into billions. Black Crescent was an elite, boutique business that took on only a small number of clients. It was wildly successful… until the money vanished along with the founder. Ten families lost their wealth in one fell swoop, forever altering the lives of everyone involved especially the teens. Each of them coped through pride, or avoidance, or lust—but the crutches have become sins…. 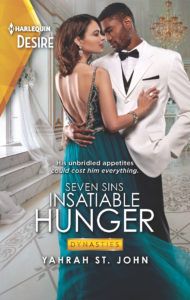 Insatiable Hunger tells Ryan & Jessie’s story: Financial analyst Ryan Hathaway grew up with corporate attorney Jessie Acosta as his next-door neighbor. They’ve been best friends for as long as Ryan can remember, but she sees him as a nice guy and one of the lucky ones because his family didn’t entrust their life’s savings to Black Crescent because the Acosta’s lost everything. Ryan never admitted he’s carried a torch for Jessie all these years because Jessie was interested in Hugh O’ Malley whose family helped pay for Jessie’s education after her family lost its fortune. That changes at the ten-year high school reunion when Jessie suddenly sees Ryan with new eyes. Their relationship shifts from friends to lovers with an insatiable hunger they can no longer deny. But when the past creeps in threatening their newfound love, will they run from the drama or fight for love?

My last contest had the most entries I’ve ever had. so I’m going to do it again! In honor of Insatiable Hunger, answer the five (5) questions correctly on my website and you’ll be entered into a contest for Two (2) fifty $50 Visa Gift cards.

Remember I mentioned while under quarantine, I was going to finish the first book in a new military series which had been collecting dust for 2 years? Well, I did it folks. Yep. I finally finished CLAIMED BY THE HERO. This new self-published book, Book 1 in the Mitchell Brother’s trilogy will be coming your way in September. You’re the first to see the new cover!

As the oldest son of a legacy a military family, Caden Mitchell has always done what was expected of him. Get straight A’s, go to WestPoint, become a Major in the Army. Check. Check. Now Caden wants a career in the political arena and with his family connections, the Governorship he has his eye on is within his grasp.  Too bad, his love life took a backseat to his ambition. Back in the day at WestPoint, Caden found Savannah Grace Vasquez, the love of his life, but after a few short months together she disappeared from his life never to be heard from again. But now that’s he’s back in the spotlight, Savannah has resurfaced bringing with her an autistic son he never knew he had. Should he risk it all for the love they once shared and could have again? Or should he marry the woman his family has chosen for him as the perfect political wife?

On the Harlequin Desire font, I’m working on a new 4-book series on the Lockett family who own a football franchise. We are still volleying ideas on titles back-and-forth, so I’m not ready to share them yet, but the Lockett siblings: Roman, Julian, Giana and Xavier will take center stage. Roman’s book is already in the can and I’m working on Julian’s book as we speak.