Greetings Readers. I know it’s been awhile since I’ve sent a Yahrah St. John newsletter. My apologies. Life sort of got in the way and I was okay with that. Suddenly my personal life with my new marriage and trips were more fun than my writing career.

Learning that the Kimani romance line was closing last year definitely didn’t help, but it wasn’t the sole cause of my lack of excitement over putting fingers to the keyboard. Although I knew I could continue to self-publish, I had a season of doubt on whether I wanted to continue. Working full-time, self-publishing and still enjoying life is not as easy as it may look. It takes balance as I’m sure any other writer or working mother can attest to. Writing was put on the backburner for several months until I could get my mojo back.

I’m happy to attest that I’ve found it again. It may have taken half a year, but I can report that I have finished two books within the last four months. First up, my 29th book: CAPTIVATED HEARTS, the final installment in the Hart Series.

Jada Hart dreamed of making it big as a TV anchor at San Francisco’s WLB-TV. She pulled up stakes from her family home in Dallas believing her dream would soon be in hand. But five years later, and still at the same station, she’d covered nothing but fluff news for the entertainment segment. But one day, in walked a new owner, Damian McKnight, who recognized Jada’s on-air potential This was despite the fact she constantly challenged him in front of his employees. But Jada had the hots for Damian. She admired that he’d pulled himself up by his bootstraps to escape poverty and become a media mogul. Plus, he was just plain sexy—sexy chocolate! Soon, the chemistry between the pair would be too much to be denied, and they’d fall into a glorious affair. Jada would also get her shot at the anchor seat, but would their affair be discovered? Would she lose her colleagues’ respect if they believed she’d slept with Damian to get ahead? What initially started out as hot sex would become something far more deep: Love. Will Damian and Jada walk away from their affair when both of them were Captivated Hearts?

If you’re headed to the airport out of town, creating a staycation at home or just headed to the beach to say hello summer: Pick up a copy of my 29th book: CAPTIVATED HEARTS! 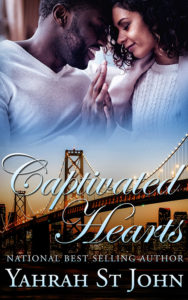 Order your copy of Captivated Hearts today is available on Amazon: https://amzn.to/2M4Z36S

CONTEST
To celebrate my new release, I’m giving away a $100 Darden gift card to one (1) lucky winner who enters my Captivated Hearts contests by July 15th. Visit my website for details: http://www.yahrahstjohn.com/category/contest/

If you’re not a social media junkie and following me on my various platforms, then you missed my announcement I have joined Harlequin’s Desire family. The second book I’ve completed AT THE CEO’S PLEASURE will be released in January 2019 and is part of a new Desire trilogy titled The Stewart Heirs. More details to follow.

I’ve been delayed starting my next self-publishing effort, a new military romance series, but I’m fleshing it out now. You can expect my 30th book to be released sometime this fall.

As always, your support means the world to me.